(without going all the way back to the womb, or causing cancer)

In a column last month, I posed the question whether the methylation clocks of Horvath are drivers of aging or responses to aging. If we intervene so as to set back the clock, are we signaling the body to be younger, or are we shutting down the repair mechanisms that the body has engaged in response to the damage of aging?

There’s a preprint from David Sinclair’s Harvard laboratory, posted on BioRxiv but not yet published, with very encouraging news for those of us who think that resetting the epigenetic (methylation) clock is a path to anti-aging. They suggest that 3 of the 4 Yamanaka factors, administered in short pulses, can set back the Horvath methylation clock without turning functioning tissues back into stem cells. The same study offers evidence to support the hypothesis that the epigenetic clock is a lethal driver of aging, rather than an adaptive response to damage. 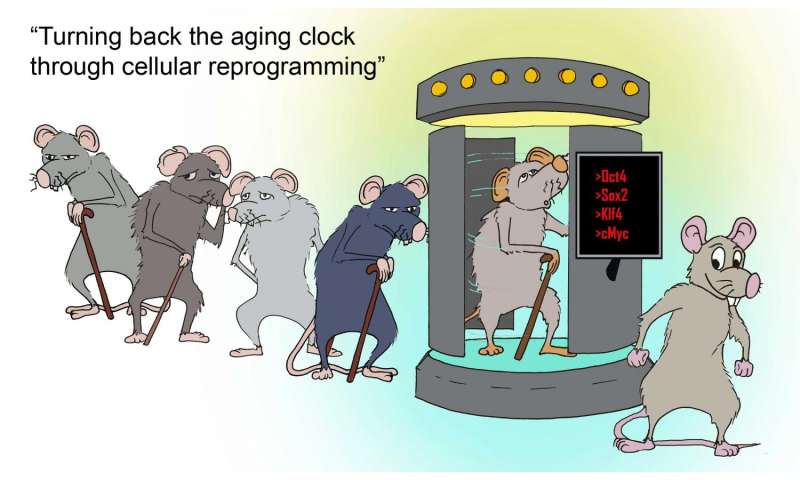 Sinclair opens the paper with an un-footnoted statement that aging consists in accumulated damage, as if this is uncontested and incontrovertible. He refers to the straight-line methylation changes that happen predictably and consistently with age as “epigenetic drift”, as if these changes were random. He believes that they are ‘loss of information” when these changes show every sign of being predictable and directed.

In the standard evolutionary paradigm, the mouse is evolved to live as long as possible, all other things being equal. (To be explicit: I don’t believe this; I think the mouse is evolved for a lifespan optimized to its ecology, not longer or shorter.) If you believe this standard paradigm, then why doesn’t the old mouse reset its epigenetic clock without our having to do it for him? In Sinclair’s account, the mouse has lost information, and can’t do it. But the Yamanaka factors are all in the mouse genome, and if that is all the information the mouse needs, we have to ask why the mouse needs us to send the signals.

We wondered whether mammalian cells might retain a faithful copy of epigenetic information from earlier in life, analogous to Shannon’s “observer” system in Information Theory, essentially a back-up copy of the original signal to allow for its reconstitution at the receiving end if information is lost or noise is introduced during transmission17.

It’s cute that Sinclair invokes Claude Shannon’s foundational theory from the 1930s on transmission errors and signal correction. But is it relevant? The reason that Sinclair and many others assume the information (how to be a young mouse) is lost is that they believe that evolution has motivated the mouse to stay young and keep making babies if only it could. If the information isn’t lost, doesn’t that defeat the very premise of Sinclair’s “lost information” theory of aging?

The point is that Sinclair is a superb experimentalist. He is also realistic enough to accept the overwhelming evidence that aging is an epigenetic program, and that the best way to influence it is to reset our epigenetics. But he is still mired in the old theory that denies it is possible for an aging program to evolve, so his efforts to frame his work in the context of “lost information” and “random drift” are strained to say the least.

Now that I’ve got that off my chest, let’s get on to the substance of this new finding, and the carefully-designed experiments that support these findings. He and co-authors demonstrate that mice treated with OSK (the first 3 out of the 4 Yamanaka factors OSKM) have restored capacity to regenerate damaged nerve cells, a capacity which is normally lost early in life. They go on to show that OSK isn’t directly responsible for regenerative capacity. And they demonstrate that resetting the methylation pattern on the mouse DNA is necessary for the restoration.

Specifically, they engineer mice with a cellular switch that can turn on OSK in response to a applied antibiotics. They flip the switch in the eyes only, then crush the optic nerve to see if it grows back. Normally, a mouse is able to regenerate nerves only while it is in early stages of development.

Yes, the nerves grow back if the eyes are pre-treated with pulsed OSK. And the benefit is lost in the absence of methyl transferase enzymes. This last result was part of the experiment in order to demonstrate that the mechanism for restoration involves re-programming methylation patterns on the chromosomes. rDNA methylation age of 12-month-old RGCs FACS isolated from retinas infected for 4 weeks with -OSK or +OSK AAV together with short-hairpin DNAs with a scrambled sequence (sh-Scr) or targeted to Tet1 or Tet2 (sh-Tet1/sh-Tet2).

Questions not addressed yet

In the main experiment, OSK was induced just in the eyes, so it was just the eyes that were rejuvenated. But they also report a “safety” test done, in which OSK was induced in the whole body at a low level for an entire year without toxic effects. Of course, it’s nice to know that the low-dose OSK was not toxic and that cancer risk did not increase. But did the mice benefit from the whole-body treatment? Did they show any signs of rejuvenation, or of enhanced stem cell function?

There is a Horvath methylation clock for mice. Did the mice get younger according to the Horvath clock? The authors report that damaging the retinal nerve made the nerve cells older according to the methylation clock, and that the application of OSK brought the cells back. But I don’t see anywhere in the paper a measurement of the eye’s methylation age before and after the OSK treatment, independent of injury. For that matter, there is no discussion of the methylation age of the mice treated with whole-body OSK for a year. These omissions are curious. Are they suspicious? Have they tried and failed to set back the methylation clock, and they don’t want to report it? Certainly it’s a question I would ask if I were reviewing this ms. Maybe we’ll know the answer when the paper is published.

Did mice live longer after treatment with OSK? Answering this one takes time, and perhaps the Sinclair lab has mice even now that are living longer, but it will be a few years before we know. Or perhaps the treatment has failed so far to extend lifespan, and Sinclair is reluctant to report a failure.