When we think about things we can do to have longer, healthier lives, it’s the metabolism that comes to mind—diet, exercise, supplements.  It’s a surprising fact that (at least until the next generation of anti-aging technology becomes available) the most effective things we can do are not just psychological—they’re social.  Perhaps because we were raised in the most pathologically individualistic culture in the history of humanity, this seems hard to take in.  The message is to embed in your community and your family, to actualize your creative potential, to love the people around you, to celebrate life and connect, only connect*.

Philosophers from Kant to Buber like to distinguish two ways that people may relate to one another.  One is utilitarian, using the person to help you make money or obtain something else that you want.  This kind of relationship needn’t be sinister.  There can be cooperation and mutual benefit, but the relationship is a calculated investment for personal gain.  The second kind of relationship is a core of human friendship or love or companionship or empathy that we value for its own sake, independent of whether we can get anything out of it.

Kant (paraphrased by Popper) said, “Always recognize that human individuals are ends, and do not use them as means to your end.”  Buber said, “If I face a human being as my Thou, and say the primary word I-Thou to him, he is not…He or She, bounded from every other He and She, a specific point in space and time within the net of the world;…but with no neighbour, and whole in himself, he is Thou and fills the heavens. This does not mean that nothing exists except himself. But all else lives in his light.”

Both utilitarian relationships of power and reciprocal relationships of love can contribute to longevity.  There is a longevity bonus attached to social status and power, and a separate correlation with family, sexual contact, and loving connection.

The protective effects of marriage have been known a long time.  Darwin quoted William Farr’s study of the French (1858), finding that marriage (except teen marriage) is associated with better health and lower mortality.  But marriage is difficult to disentangle from economics, access to health care, social standing and a host of other correlates. This paper finds that after correcting for everything under the sun, married men have 7% lower mortality, and women 4% lower, compared to unmarried.  It’s the human connection that counts.  “Although marriage keeps people alive, it does not appear to work through a reduction of stress levels.”  Two kinds of stress must be distinguished.  The stress of poverty or low social station or suffering abuse and contempt of another human is bad for your health and longevity.  But caring for others, taking on responsibility, leading an active, empowered and demanding life can be beneficial [ref].

Both women and men are at highly elevated risk for death during the months immediately following the death of a spouse [ref].

It takes a long time to measure the effect of anything on human mortality.  Elissa Epel has pioneered the use of telomere length and telomerase activity as proxies for life expectancy.  She has found telomere loss to be associated with the bad kind of stress—feeling trapped by circumstance, powerless, stuck living in a way that is not what one wants.  Worry shortens your telomeres.  She found telomere connections to a variety of healthy living habits, including exercise, weight loss and meditation.  Suppression of telomerase can be detected from a single experience of humiliation that is tame enough to pass muster with an ethical review board.  This study finds that depression, anxiety and trauma leave their mark on telomere length in men but not women.  Young women also survive adolescence with more of their telomeres intact than young men.  Do men somatize their stress more than women?

Epel and her mentor, Liz Blackburn, have been slow to acknowledge the (now overwhelming) evidence that telomere shortening has a causal relationship to mortality.  They write of telomere length as a “marker” that tells a tale about past stresses and traumas.  They look for a proximate cause in inflammation and oxidative stress, but stop short of asking for a deeper, evolutionary significance.

There have been many studies seeking to connect fertility to longevity in women.  The consensus is a small positive connection—women who have more children tend to live slightly longer.  A message that stands out from this: for women, giving birth after age 40 offers a big bump in longevity, equivalent to setting your aging clock back more than 3 years.  For fathers who have children late in life, the data is thinner, but what data I could find indicate a benefit almost as strong.  The most relevant study I could find was for an Amish population, “a population characterized by large family sizes and close-knit familial units.”  Seven children was average  for these families.  Longevity of both mothers and fathers increased with each additional offspring, up to the 14th child.  But not beyond.

Less clear than the statistics is the interpretation. In my mind, this is all about caring.  When we stay involved in our children’s lives and care about them, there is a benefit for our health, mediated through neurochemistry.  Just my opinion.

(One prominent study finds a negative association between female fertility and longevity, and I have re-analyzed their data to show a positive effect.  The study was co-authored by Tom Kirkwood, best known for the theory that the reason for aging is that the body needs to spend energy on reproduction.  You gotta wonder when the one study that marches to the beat of a different drummer is done by the person whose reputation depends on the contrarian result.)

How could Mother Nature be so politically incorrect?  It is a sad and stubborn fact that, independent of all else, money is a strong predictor of longevity.

In 1980, the poorest one tenth of Americans lived 3 years less than the richest tenth.  By 2000, that gap had widened to 5 years [ref].  It is wider yet today—possibly as much as 14 years for males, 8 for females if this study is to be believed.

You would think there isn’t much difference in access to medicine within the top 1% of family income, but even there, the rich end of the top 1% lives half a year longer than the slightly-less-rich end [ref]. 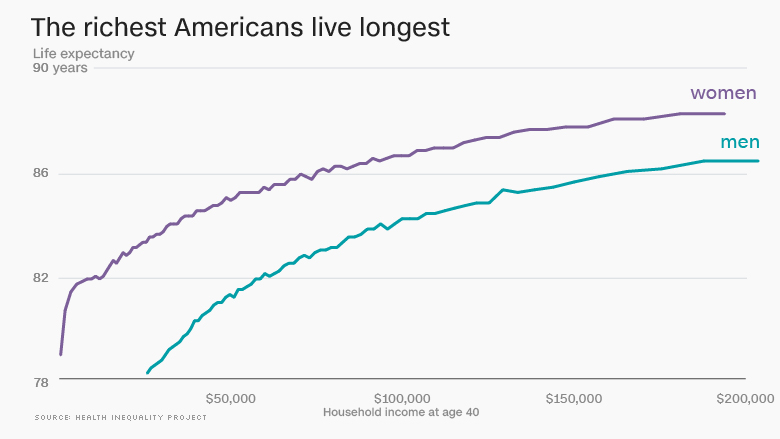 This is a psycho-social effect, connected to prestige and status.  It has little to do with access to health care.  We know this because the wealthy people in poor countries are living longer than the middle classes in wealthy countries, who have comparable incomes and perhaps better access to medical care.

Redeeming Mother Nature’s rep is this study of the Flemish Renaissance which tells us that elite musicians and poets, though poor, lived as long as wealthy non-artists.  Maybe orchestra conductors have just the right combination of leadership and aesthetics to maximize longevity.

A classic study [1943] by an Ohio Medical professor compared lifespans of historical figures in many different fields.  Musicians do better than painters.  Leaders in democracies do better than hereditary monarchs.  Philosophers live longer than poets.  The main conclusion that Lehman puts forward is that late-bloomers live longer than child prodigies**.  This has convinced me that Hillary, Bernie and The Donald don’t really want to be President—they’re in the race for a longevity dividend. Frequency of sex is a positive predictor of longevity.  The best-known study came from Caerphilly in South Wales [1997].  Men 45-60 who were sexually active had half the mortality rate of men who had sex less frequently.  (I’ve been unable to find corresponding data for women, or more recent data for men.)  The effect seems to be more psychosocial than physiological, because the association is stronger with frequency of intercourse than with masturbation frequency.  (The article in British Medical Journal is written with a British sense of humor, and the authors make a point of debunking folk wisdom and the many religious traditions that associate orgasm with a depletion of vitality, and are especially tough on onanism.)

I think it’s not an accident that the hormone oxytocin is associated with youthful metabolism and is produced in response to intimacy and feelings of closeness.  Oxytocin spikes in an orgasm.

In this study, a crude measure of happiness was associated with a 20% drop in all-cause mortality.  From everything else we’ve seen, this would seem to be unexpectedly low.  If happiness could be more reliably measured and separated from other variables, it might loom even larger.  “For a 70-year-old man of average health, satisfaction of one standard deviation above average promises a 20 months longer life.” [1989]

Tilting the odds for a long life is not just a matter of discipline and abstemious living.  A lot of the things you can do to live a long time are things you want to do, or things that will make your life better right now.  Turn off your computer and spend time with a friend.

* “Only connect” is a refrain from E.M. Forster’s novel, Howard’s End
** Lehman emphasizes that much (but not all) of this is a selection effect: If you attained greatness at age 50, that means that you didn’t die before you were 50.