Starve yourself.  Exercise until it hurts.  Buy expensive supplements and stay away from the foods you love most.  You may have the impression that living a long time is no fun at all.

But the good news is that the most powerful life extension strategies are things we want to do anyway.  Live in a way that makes you happy.  Connect deeply to friends and lovers.  Spend time with your children.  Enjoy sex more frequently.  Take leadership in your community.  Express yourself artistically.

The very reason that aging evolved is to stabilize death rates for the sake of the community.  How can we be surprised to learn that the biggest factors affecting our life expectancy are not individual life style but social and communal connections?

Human genetics were shaped in a history of competing small tribes.  What I have long wondered about is that a well-functioning tribe needs a lot of loyal followers and one resolute and charismatic leader.

All animals living in a body, which defend themselves or attack their enemies in concert, must indeed be in some degree faithful to one another; and those that follow a leader must be in some degree obedient.
— Darwin, The Descent of Man

Somehow the leaders and followers had to come from the same gene pool.  Selection is simultaneously for strong-willed leaders and compliant followers.  And when we look today at the variety of personalities, we may observe the successful results: most people are indeed content to take their views and opinions from the community around them, to perform faithfully the task allotted to them, to raise few questions.  And yet there are plenty of us—all of my readers, I’m sure—who question authority, think independently, and who are in the habit of pro-active assertion.

How nature has arranged this, I can only imagine.  My guess is that there are infrequent combinations of genes that lead to independent-mindedness.  But there must also be a great deal of phenotypic plasticity.  That’s a five-dollar word describing a phenomenon biologists don’t understand very well.  Each individual is born with the potential to develop in a number of different directions, and adapts epigenetically within a single lifetime to choose one destiny among many.  Somehow, animals and people figure out when leadership is demanded of them, and respond accordingly, and they shut up and obey orders when appropriate, which for most people is most of the time.

The relevance of this to aging is that changes of leadership are disruptive and costly.  Many a tribe must have fallen victim to neighboring tribes during times when old leadership has died or succumbed to senility, while new leadership is distracted by jostling for power.  A beloved leader with a loyal following was and is a great asset to the community.  It would have served the community well if evolution might have arranged for leaders to have a longer life span than followers from the same community, the same pool of genes.

The take-home message:  Cooperative leadership is good for your health.  Earn the love and respect of your neighbors for your contributions to community life.

This study of telomere length in heart patients found that depression accounts for 2½ years of excess telomere attrition.

I think of depression as one side of a continuum, from a full capacity for awareness and open-hearted enjoyment at one end of the spectrum to loss of all vitality and incapacitating numbness at the other end.  But the culture of Western medicine has led to a perspective from which depression is treated as a chemical imbalance in the brain that can be objectively diagnosed, present or absent with no “in between”.

In my view, this accounts for the fact that when psychologists study the health effects of a positive or negative outlook on life, they treat depression as an artifact that warrants separate treatment in their statistics, lest it bias their results.  It is the more remarkable, then, that even after removing from their sample men who are clinically depressed, the authors of this study still find that dispositional temperament accounts for 9 years of life expectancy.  Among a thousand men aged 64-84, those who leanded toward pessimism had more than twice the cardiovascular mortality rates of those who were disposed toward optimism.

9 years of added life is an effect that stands out head and shoulders among the effects that epidemiologists are wont to study.  Points of comparison: If cancer were completely eliminated, it would add 4 years to life expectancy.   Estimates vary for years lost to obesity in America, with a range of 3 to 8 years. Smoking is associated with 10 years of lost life, before subtracting a correction for indirect risk factors that correlate with smoking.

A speculation concerning depression and evolution

Why is depression such a common malady in our culture?  If depression is so bad for us, why has evolution put up with it?  My conjecture is that this is related to the need for phenotypic plasticity in the choice to become leaders or followers.  The genes for leadership must be preserved in the community, and yet most people with genes for leadership must be convinced, nevertheless, to live their lives as loyal followers—else the community would be rent by dysfunctional power struggles.  Depression is nature’s way of keeping too many people with leadership genes from disrupting the authoritarian structures of their community.

Frequently cited in this regard is a fertile long-term study of health and class in the British civil service system.  The Whitehall Study began in 1967 and continues to this day.

Nearly half a million Brits participate in Her Majesty’s Service, and there are more than 20 grades and subgrades, in a clearly-defined hierarchy of who gives orders and who takes them.  There is a close analogy to grades of military officers.

High-level officers are generally better paid and can afford a more comfortable life.  But medical care in Great Britain is socialized, and disparities in standards of care are relatively small.  There are also differences in family wealth that make the social service grade an independent measure of status, and not merely a surrogate for wealth.

The remarkable finding is that each grade of the service lives longer on average than all the grades underneath it.  Social status is tightly correlated with longevity. 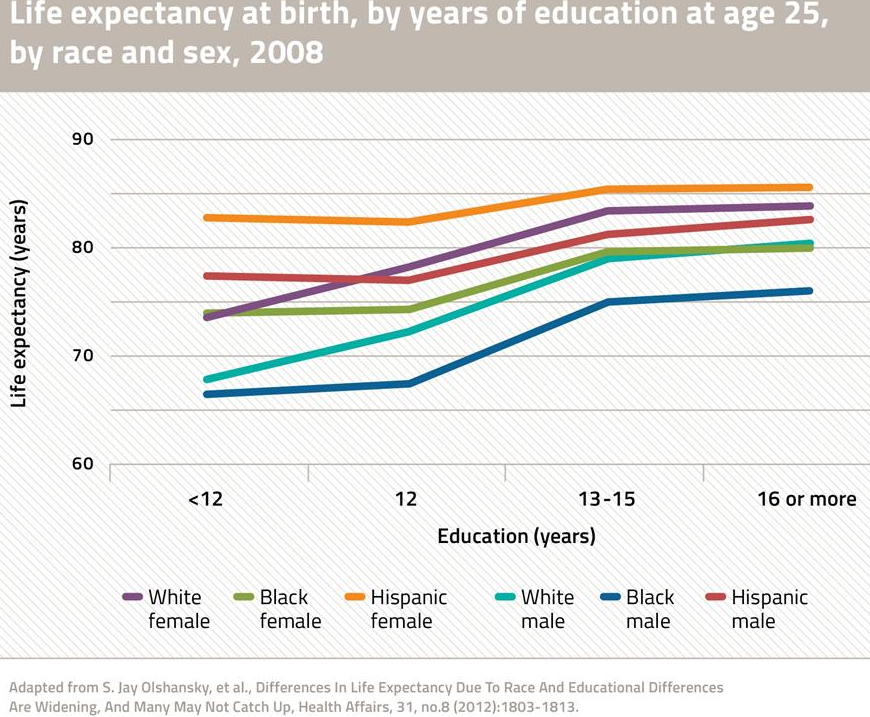 A college education is worth ten years of life to a black male, but only 3 years to a hispanic female.  I don’t think it’s what they learn in school that makes the difference, but the career opportunities and the social connections that come with a college degree that account for the statistics.  I would guess also that there is a good deal of filtering in the process: preferential selection of people with patience and discipline who are inclined  to think about their future. This study attempts to separate the effect of education from filtering for iwhat the author calls “conscientiousness”.  He concludes that both play a role in extending lifespan.  And here is a more recent, drier and more thorough account of differences in life span by race and education, focusing on completion of high school.  A high school diploma seems to be be associated with 5 extra years for a white male, but almost nothing for a black female.

END of Part I

10 thoughts on “Social Correlates of Longevity—Part I”