Demography is the statistical study of population age structures, or the study of aging and fertility through population statistics.  It’s not deep math, but it definitely attracts people who love numbers.  The world’s formost demographer is James Vaupel, an American who has been working at the Max Planck Inst in Germany most of his career.  Annette Baudisch is a brilliantly creative protege of Vaupel, who has come into her own in the last decade*.

The point of this is that when such people declare that evolutionary theory doesn’t work, we ought to be listening.  We the evolutionary theorists, we the gerontologists, and we who simply seek a path to a longer, healthier life, and we who have been influenced, perhaps unawarely, by tacit assumptions about evolution.

Essay in Science a year ago, Survey in Nature last month

Last month, these two world-class demographers published a cross-species study correlating fertility with the rate of aging, and they report results that are deeply at odds with the predictions of evolutionary theory.  They are not shy about saying so.

The classic evolutionary theories of aging provide the theoretical framework that has guided aging research for 60 years. Are the theories consistent with recent evidence?

At the heart of the theories lies the observation that the old count less than the young: Unfavorable traits are weeded out by evolution more slowly at higher ages; traits that are beneficial early in life are selected for despite late life costs; and resources are used to enhance reproduction at younger ages instead of maintaining the body at ages that do not matter much for evolution. The decline in the force of selection with age is viewed as the fundamental cause of aging. It is why, starting at reproductive maturity, senescence—increases in susceptibility to death and decreases in fertility—should be inevitable in all multicellular species capable of repeated breeding. Yet, this is not the case. Increasing, constant, and decreasing mortality (and fertility) patterns (see the figure) are three generic variants that compose the rich diversity of life trajectories observed in nature. For vertebrates, reproductive trajectories are commonly hump-shaped, and death rates may start rising much later than reproductive maturity. Thus, a new view on the fundamental causes of aging is needed to explain the clash of theory and data.  [from a 2012 Science essay by the same authors]

This is the kind of condensed academic prose that makes scientific communication so efficient to specialists and so opaque to anyone on the outside trying to figure out what’s going on.  They have captured the core of three evolutionary theories that are currently considered acceptable.  (If you are already familiar with them, you will recognize what they’re talking about; if you would like more detailed accounts of the three theories and their failures, I have written about that here.)  They go on to say that aging in nature has a richness and diversity that these simple theories do not begin to address.  “theories to explain the ultimate evolutionary causes of the varieties of ageing…are in their infancy.”

Baudisch pioneered the study across species of different shapes of life history curves, regardless of the time scale on which they unfold.  In other words, some species have life plans that unfold over days, and others over decades.  Let’s ignore that and stretch out the time axis so that they all fit in the same plot.  Some species (e.g. modern man) have a high rate of survival right up to the end, and then everyone dies in a narrow range of old age; while other species tend to die at a steady rate, unrelated to age, and for some they are actually less likely to die the older they get.  This last case seems strange to us.  Baudisch and Vaupel coined the term “negative senesence”, but it doesn’t have to look like Benjamin Button.  Just think of a pine tree that gets larger and stronger over the decades, and thus more resistant to a drought or a fire or a windstorm, thus less and less likely to die with each passing year.

(You can blow up the figure below to view details.)  The blue line plots fertility over a lifetime:  how many offspring are produced per unit time; the red line plots mortality: what is the probability of an individual dying before the next year or the next day?  These many different plots represent the diversity of different patterns of aging in nature.  The graphs are all stretched out or compressed in time so that each box contains one lifetime, whether that be a day or a decade. 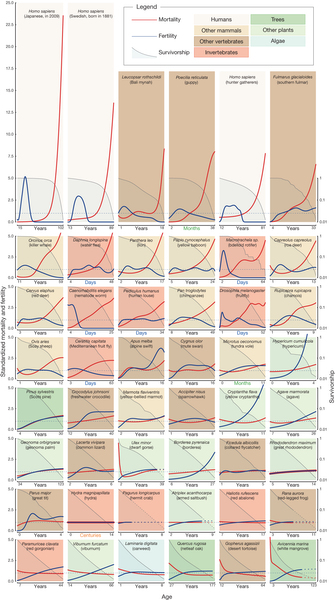 The top row codifies the life plan that is most familiar to us, because it is ours.  Fertility peaks in early life, then declines.  For females, it declines to zero.  Mortality is modest for a long while, then it climbs steeply and everyone dies.  This is the story we take for granted.  It is the form of aging shared by humans, guppies, and certain sea birds.

The next line shows life plans that are similar, but where mortality rises more slowly, so that age of death is spread out over time.  This row contains some familiar mammals like deer, lions, and orcas, but it also contains water fleas and bdelloid rotifers, microscopic creatures famous (at least to biologists) for their chastity.

Further down are stranger and less familiar life plans, including those where fertility rises as mortality falls through most of the life span. According to evolutionary theory, metabolisms aren’t supposed to be able to do this.  The whole reason for aging is (according to theory) the necessity for compromise.  Some organisms can have their cake and eat it.  (Would it be mixing metaphors to call this an evolutionary free lunch?)  When theory accounts for aging in other species as a sacrifice of longevity for fertility, the story rings hollow.  Why are some species but not others compelled to this compromise?

Of special significance is post-reproductive life span.  Human females go right on living after they have lost their fertility.  This is supposed to be explained by the need to care for her grandchildren.  But in this chart are several other species that also outlive their fertility, including elephants and ground squirrels but also worms and guppies that don’t care for their young at all, let alone their grandchildren.

This poses a big problem for evolutionary theories of aging, because maintaining the body through an extended life span is always presumed to be costly in one way or another – that’s why the body skimps on the job, and the body is permitted to deteriorate with age.  Why, then, would the body take the trouble to preserve itself for a time when it was unable to reproduce, useless to the species and invisible to evolution?  “There should be little or no postreproductive period in the normal life-cycle of any species.”, predicted George Williams in his seminal paper (1957) which has inspired most modern thought on the subject.  (I have written about this topic, suggesting that the post-reproductive segment of the population provides a stabilizing buffer in times of famine, helping to guard against extinction.**)

The bottom line is that nature has been able to do pretty much anything she wants with the metabolism of aging, and the trajectory of mortality that comes from that metabolism.  Most of the evolutionary theory on the subject is based on the idea that natural selection could never affirmatively choose aging if there were a choice.  Aging is bad for the fitness of the organism that suffers aging, and theory says that natural selection should always work against aging.  If most living things suffer decline with age, leading to death, this must have taken place despite natural selection.  There must be some genetic constraints, or physical limitations, or conditions beyond control of the genome.

This survey of Baudisch and Vaupel tells a different story.

For fifteen years now, I’ve been saying that the evolutionary theory of aging doesn’t work, and that it’s high time to stop making excuses for the old theory, to adopt a new theory that fits better with empirical reality.  I have argued from experiments and from field surveys and from general knowledge and from logic, and I have found many people who agree, and maybe a few who have been turned around by my presentation.  But I don’t have the stature that would attract a large readership, or compel anyone to take my word for it.  Maybe they’ll listen to Baudisch and Vaupel.

* I first became aware of Baudisch in 2004.  One of the most common of ancient human follies is to imagine that the way things are is the way things must be.  William D Hamilton – a biologist smart enough to know better – published in 1966 his “proof” from fundamental precepts of evolution that all living things must decline with age.  In a paper provocatively titled, “negative senescence”, Baudisch and Vaupel surveyed a number of animals and plants that don’t decline with age – quite the opposite, they continue to get larger, stronger, and ever more fertile.  “Negative senescence”.  They even included their own “proof” that aging was impossible, and that all living things ought to grow ever stronger and more fertile.
[back to text]

** In this article, I have proposed that population stability is a major part of fitness in nature.  Populations that swing too wildly up and down are in danger of extinction, and it makes sense that such extinctions are a form of Darwinian selection, and they would have left their mark on the genome.  In the case of post-reproductive life span, here’s how it would work:  Sometimes there’s plenty of food, and the population is expanding on a trajectory that’s going to lead to overpopulation and a crash.  Then it’s a good thing to have these older, infertile adults around, because they eat up some of the food, but they don’t contribute to population growth, while the population is growing too fast already.  At other times, food may be scarce and the population is shrinking.  Then the post-reproductive population will be the first to go, because they are old and weak.  They are expendable, from a demographic perspective, because when they disappear there’s no loss to the population’s potential for growth, but there is a benefit when competition for scarce food is reduced.  This is the sense in which a post-reproductive population can provide a buffer, protecting against steep population fluctuations and potential extinction.  [Link to article in Oikos] [back to text]

17 thoughts on “A Heavy Hitter Weighs In Against Evolutionary Theory”