I have become concerned that dangers of the COVID pandemic have been overstated, perhaps deliberately. The containment measures adopted in most Western countries have had little effect on the spread of the virus, but they have been maximally disruptive of our economic and cultural lives, and have produced loneliness and isolation, while throwing millions of people living on the edge of their means into desperate poverty. (graphic is my own, based on data from http://OurWorldInData.org/coronavirus )

Here is Dr John Ioannidis, professor of epidemiology at Stanford Medical School, speaking to this point.

The good news is that daily deaths from the virus have peaked worldwide, and begun their decline. Since death rates trail the rate of new infections by 2-3 weeks, we expect that spread of the virus peaked worldwide in mid-March and in the US 10-12 days ago. Does it make sense to continue with policies of economic shutdown and social isolation now that COVID is declining? The answer depends on whether these policies have been responsible for the decline, or whether COVID is declining for other reasons. I tend to think “other reasons”, but I’ll try to present both sides. I recognize that there is no definitive proof, but only judgment in the face of diverse evidence. My bias is that in such situations I lean toward a contrarian view.

There are three factors which I consider to be plausible reasons for the decline of COVID:

1. Respiratory illnesses tend to be seasonal. Reasons for this are not fully understood, and there may be several factors [ref, ref, ref]. Every year, there is a flu season, and deaths from flu are down almost 100-fold from winter to summer.

Is COVID19 likely to be an exception to this rule? We already see that cold countries have much higher incidence and much higher death rates from COVID than warm countries. 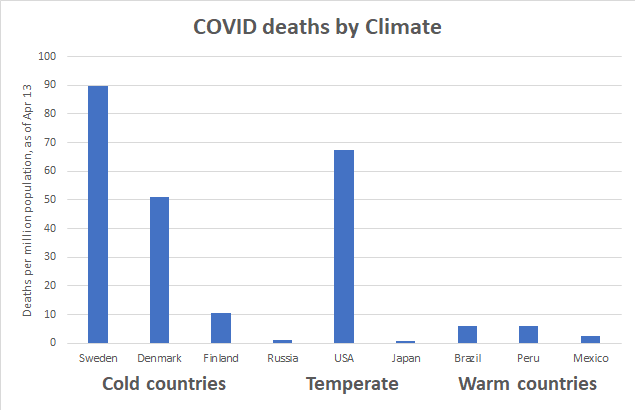 India may be the most striking example, a very hot country with weak central controls and a large population that is unreached by medical services. There has been no effective lockdown in India, yet COVID deaths per million population are comparable to the US.

The above leaves me very hopeful that, like SARS and MERS and countless strains of cold and flu that went before it, COVID is dying out as spring weather sets in.

In this week’s Science magazine, an article (summarized on ScienceBlog) argues that unlike these predecessors, COVID may not slow down with warm weather. As I read it, their basis for this claim is that these other seasonal illnesses spread sufficiently to engender herd immunity in the spring, but because of lockdown COVID has not crossed that threshold. Both these assumptions, in my view, are suspect. There is no scientific agreement why respiratory infections are so deeply seasonal, but it’s an empirical fact. If it were just about herd immunity, then we would see some waves of cold and flu that start in the spring or summer and die out by fall; but we rarely see this. And below I argue that if COVID is as contagious and as persistent as is claimed, then we (America and the world) may be acquiring herd immunity already.

2.  In just a few months, doctors have shared their successes, and there are now several promising treatments (though there has not been time for blinded, controlled clinical trials).

3.  It’s more difficult to know whether herd immunity is already being established around the world. We depend here on experts and on computer models. Here’s an expert (Professor Knut Wittkowski, head of Rockefeller University’s Department of Biostatics):

COVID is reputed to be extraordinarily contagious, and if that is so, I would argue that the kinds of half-measures used in the US and other Western countries are slowing but not preventing spread of the virus. People are still shopping in supermarkets and drug stores. Labs are claiming the virus remains active on surfaces we touch for 24 hours, but we are still freely sending and receiving mail and packages.

If claims that non-symptomatic carriers can be contagious are credible, then surely a majority of people have been exposed by now, enough that our immune systems have generated the first few antibody-producing B cells, which can multiply rapidly (exponentially) when we are exposed to more virus.

If claims that non-symptomatic carriers can be contagious are not credible, then why are we locking ourselves away from people who look and feel perfectly healthy?

Possibility number 4: Can we credit the lockdown for present decline of COVID?

There are many politicians and policymakers who will line up to take the credit for COVID’s decline. We would all like to think that the individual sacrifices we are making these months have achieved a collective purpose.

Empirically, we can never resolve the counter-factual, “what if we had not locked down?” The best we can do is to compare regions that have locked down to regions that have remained open. If we do this, then, subject to the caveat that all these numbers have been gamed in the reporting, we have to conclude that the evidence for effectiveness of lockdown is not strong.

The scale on the left is in deaths per million population. For comparison, the ten most recent flu seasons in the US have caused death rates ranging from 34 to 175 (according to CDC).

As of this writing, there are 8 US states that have not locked down by executive order: Arkansas, Iowa, North and South Dakota, Oklahoma, Nebraska, Utah and Wyoming. Their death rates per million are, respectively, 11, 15, 7, 12, 27, 9, 6, and 3, all well below the national average of 77.

Looking at the state and country data, it appears to me that lockdown has been a response to high COVID mortality, rather than a preventer in advance of mortality. Perhaps this is the nature of political humans, to respond only after a threat becomes serious. But as policy, it is (to use the technical term) bass ackwards. Quarantine measures are very effective in early stages of an epidemic, but of limited usefulness once the epidemic has gotten its toehold in the population.

China locked up quickly, cutting off all travel out of Wuhan in late January. Rules were liberalized and commerce resumed 2 months later. This makes sense. The US waited too long to lock down, and now, at a time when isolation measures are least useful, they are being intensified. I fear that the economic, psychological, and cultural consequences of this new wave of restrictions will be severe, while the epidemiological benefit will be marginal.

Greece locked down promptly and probably saved the whole country an ordeal. (I’m grateful to Zisos in the comment below.)

Theoretically, is there reason to believe that limited social contact and economic activity slows the spread of the disease. Yes, without a doubt. But is there reason to believe that it can affect the number of people who will eventually be exposed? Much less clear. I would say, only if the disease is truly wiped out in its early stage, before it becomes widespread and engenders herd immunity.

Heaven knows we all could use a few weeks of vacation. But we wouldn’t choose to spend it indoors, apart from our friends, deprived of cultural events and social supports, church, Kiwanis and AA meetings and yoga classes and folk dancing and community theater.

Congress has appropriated $2.3 trillion for the Covid Relief Act (CARES), but some claim the true cost is $6 trillion. On Wall St, the S&P lost $10 trillion in March. If we were willing to spend any tiny fraction of this money on a rationally-designed program of public health, the number of lives saved would be far greater than the highest estimate of COVID’s potential toll. Diabetes is an eminently preventable disease that causes more deaths every year than COVID will cause over its entire lifetime, and NIH spends $0.0002 trillion to prevent it.

Millions of small businesses are bankrupt. Tens of millions of people are unemployed. Depression and isolation have major impacts on health, much more so if they are prolonged as some are proposing.

I am all too aware of the potential for scientific opinion to be swayed by money and political influence. In the shadow of these unimaginable economic costs, there are a few who are profiting handsomely. Why did so much of the CARES money go to banks? Why is so much of the reporting promoting a vaccine to rescue us from COVID, when many past attempts to develop a coronavirus vaccine have been halted because test animals died. Vaccines are the most profitable segment of the pharmaceutical market, and drug companies are spared by law the costs of safety tests and are indemnified from legal liability.

The thing that keeps me up at night is not fear that I might catch the disease, but fear that Constitutional liberties in America are being systematically erased. “Hate speech” laws are being used to censor inconvenient political truths. The US government is barred by the First Amendment from direct censorship, but Google and Facebook and Twitter are immune because they are private companies, and they collectively have enormous influence on what we can find out and what we can discuss. They are doing the government’s bidding, suppressing dissent.

Dear readers, this is how fascists take power. They don’t say “Ha ha ha HA…now I’ve got you where I want you.” Rather, they get everyone scared, declare an emergency, and they offer to save us all from danger.

Read Naomi and Naomi. Remember the Reichstag fire. Discover, if you have not already, the shocking history of Operation Northwoods. Read Sinclair Lewis, It Can’t Happen Here (1936).

“Eternal vigilance is the price of liberty” has been attributed to Thomas Jefferson so often that he might as well have said it.