Aging is an extension of the developmental program into a phase of self-destruction.  This much has become clear (if not yet uncontroversial) over the last decade. But this insight is of little use to us so long as developmental biology is so poorly understood.  I have worked from a perspective in which development and aging are both driven by gene expression—an epigenetic program. Then, last week, I learned about an electrical dimension of developmental biology that is entirely new to me.  I’m grateful to Johnny Adams for pointing me to a recent Stanford lecture by Michael Levin, summarizing two decades of research from his Tufts University lab.

Levin starts by contrasting the intelligence of an ovarian tumor (teratoma) with the intelligence of a tadpole under metamorphosis.  The tumor has stem cells that can create organ tissue, teeth, bones, and hair—but their placement is haphazard, and therefore without function.  The different tissues grow in every direction with no guiding logic or structure.

In contrast, the morphing tadpole knows exactly where it is going and what it wants to be when it grows up.  Levin cites experiments from the 1960s in which a salamander tail grafted onto the side of the body turns into a functional leg, complete with foot and toes.  In experiments in Levin’s lab, he moves an eye to the back of the tadpole head, and it migrates to its correct position as the tadpole becomes a frog.

Where is the information that tells the body how to form itself?  In what form is the blueprint for the body’s shape and structure?

“Very much like the brain, Somatic tissues form electric networks that make decisions.  The decisions are not about behavior, but anatomy.”

Nerve cells communicate by passing electric currents through ion channels and deploying neurotransmitters to pass electric charge from one cell to the next.  Somatic cells use these same mechanisms to communicate with each other and decide where to go, forming into tissues and structures in a functional body. Using voltage-sensitive fluorescent dies, Levin and his colleagues have visualized the electrical structures that precede and determine corresponding anatomical structures. 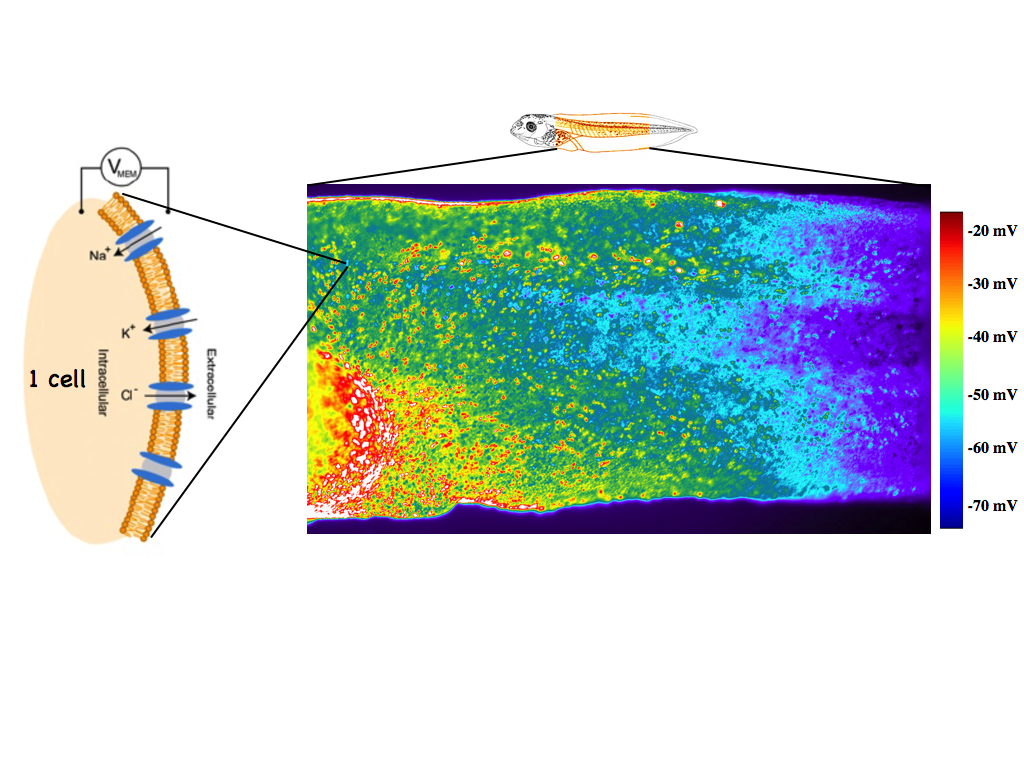 This is radical.  It is a new and unstudied mechanism of biology.  Cells in a developing body are wired together electrically, and in their connectivity is encoded the structure of the body toward which they are aiming.  The electrical connections work very much the way nerve cells in the brain do, but their purpose is entirely different. And Levin emphasizes that the time scale is very different.  Electrical signals that make brains think and make muscles contract last for a few thousandths of a second. The circuits that code for bodily structure last for hours or days.

Extraordinary claims require extraordinary proof, and so Levin has been studying this system to manipulate it for almost 20 years now.  Recently, his lab has cracked the code sufficiently to manipulate development and regeneration at a level higher than biochemistry. They have worked with planaria worms and developing amphibians, two experimental models that are capable of regeneration.  They have experimented with rewiring the circuits, and now understand the system well enough to create two-headed worms and ectopic limbs on frogs.

The story of 21st Century biology has, thus far, been about gene expression.  The body is controlled by chemical signals, and these are produced on demand by masking and unmasking different portions of the chromosome, exposing the code for the proteins that are needed in a given cell at a given time.  Our activity and our homeostasis is maintained in this way from moment to moment, and I believe that our life histories, from development to aging and death, are also controlled via gene transcription.

Now comes Levin with a demonstration that, at least under some circumstances, there is a system upstream of gene transcription that is based on electric circuits.  The system controls development at a level higher than gene transcription. For example, an entire eye can be ordered up by artificially creating an electric pattern in the right place, and the eye will have all its parts intact and be functional.  They have placed eyes on a tadpole’s tail and demonstrated that the tadpole can see through them, and their brains can interpret the images.

Living fluids, within and between cells, contain dissolved salts in the form of positive (Na+, K+, Ca++, Mg++) and negative (Cl–, PO43-, SO42-) ions, Cell membranes have pumps that can pump ions out of the cell selectively and ion channels that allow some ions through, but not others.  typically, the cell has more negative than positive ions inside, so it has a negative membrane potential, ranging from a few mV for blood and skin to tens of mV for nerve and muscle cells.  Rapid changes in membrane potential are the driving force behind muscle contraction and nerve firing.

There are drugs that can affect membrane potentials by blocking ion channels selectively.  Membrane potentials have multiple signaling functions, most notably the potential has to drop close to zero before a cell can reproduce, and drugs that keep membrane potential high are able to inhibit cell replication.  There are proposed applications for cancer treatment (inhibiting replication) and for regeneration (promoting replication). Within cells, different organelles also have membranes and there are associated intra-cellular potential differences.  Mitochondria are the most negative parts of the cell, at about -140 mV.

DiBAC is a voltage-sensitive fluorescent dye that is used to visualize patterns of voltage variation in and around a cell. [ref]  Patterns within a cell show locations and activities of the organelles.  Patterns on larger, multi-cellular scales function like blueprints of development, and in animals that can regenerate, the patterns persist and guide later regeneration whenever limbs or organs become damaged.

How do they manipulate electric patterns experimentally, to demonstrate the effect on morphology?

This is not clear in Levin’s oral presentation, but an audience member asked the question.  It is not done with external electric voltages. It is done with biochemical modification of the gateways that control ion channels.  Levin drops a hint that there are photo-sensitive drugs that can control ion gates that can be used to translate a projected geometric image into a pattern of membrane potentials.  He argues that the patterns encode “blueprints” rather than a “construction manual”, based on the fact that the program is adaptive in the face of physical barriers and disruptions, and organisms are capable of detecting damaged parts and growing new parts to the original specs. Levin’s group has tampered with membrane potentials in order to guide the growth of nerve axons in regenerating tissue [ref].  This is just the beginning of the understanding that will ultimately be necessary to reprogram electric circuits to order for medical applications[ref].

In the Levin Lab publication list, there are 28 academic publications in 2018 alone.  There’s a lot here to absorb, and it’s all new to me.

Levin was a computer scientist before he was a biologist, and he continues to be fascinated by the ways in which cells in tissues outside the brain can act as logic circuits.  Gap junctions are bridges connecting adjacent cells, through which ions can flow, transferring charge.  This is the basis of electric circuitry that supports complex logic. A post-doc in Levin’s lab designed a computer simulation that can model the activities of gap junction circuits.  This paper from 2018 ALife Conference proceedings is a good introduction, with context and lots of references.

What does this have to do with aging?

In epidemiological studies, it has become clear that exposure to radio frequency radiation is associated with higher cancer risk [review].  There are anecdotal reports of people whose mental function is affected by wifi and by nearby cell phone towers.  Part of the reason we don’t know more about the subject is that the entire telecomm industry works behind the scenes to discredit and defund the science.  (I have found that the relevant articles are suppressed in Google Scholar and PubMed searches.) Another reason is that we have no theoretical understanding of how radio frequencies interact with living cells.  The standard biological paradigm regards living systems as chemical systems, and there are no obvious ways that radio waves at the levels we are commonly exposed should affect chemistry.  Interaction of radio frequencies with ion channels is a possible mechanism, and may open the door to understanding (and then minimizing) the hazard.  Most interesting is the effect of RF on mitochondrial potential, which may connect to an emerging paradigm that cancer has a mitochondrial origin. [Here’s an older reference from the 1980s. More recent ref. And another]

33 thoughts on “The Body Electric”