“Cancer is a genetic disease.  Its primary cause is mutagens in the environment, abetted by time and bad luck.  A cell is controlled by the chromosomes in its nucleus, and when just the wrong combination of mutations happens to occur, a cell can begin to grow and multiply uncontrollably.  The next crucial step occurs when the cell acquires the ability to travel through the bloodstream and implant somewhere else.  The whole pathway from errant cell to malignant cell proceeds via chance mutations. From inception to metastasis, cancer is driven by genetics.”

This theory of cancer is more than 100 years old, but it didn’t become the dominant view until the 1950s, when, after Watson and Crick, genes assumed an exalted position in the study of biology.  The “somatic mutation theory” continues to dictate the course of cancer research and treatment today.

It is uncontested that cancer cells have abnormal chromosomes.  Dozens of different mutations have been found in malignant cells.  They have been catalogued as different oncogenes, and because they are so different in their functions, cancer has been re-conceived from a single disease to a category containing many different diseases with similar symptoms.

Are mutated genes the root cause of cancer?  Toxins that commonly break DNA (teratogens) are also found to cause cancer (carcinogens).  Radiation, ditto.  “Ionizing” radiation packs enough wallop in each photon to break a chemical bond, and is associated with cancer, while non-ionizing radiation (visible, infrared, and radio waves) is not mutagenic and generally not carcinogenic*.  This has been taken as powerful circumstantial evidence for the prevailing theory.

A direct answer to the question of whether cancer originates in the nuclear DNA is available from an experiment that is simple in principle: Swap nuclei between two cells, one normal and one malignant.  Take the mutated DNA out of a cancer cell and put it in a normal cell, to see if it becomes malignant.  Take the un-mutated DNA out of a normal cell and put it in a cancer cell to see if the cell is rescued and restored to health.

This experiment has been technically feasible for more than 30 years, and indeed Barbara Israel and Warren Schaeffer actually performed both experiments at UVM and wrote them up in 1987 [ref, ref].  The results were exactly the opposite of what was expected: The cell with normal cytoplasm and cancerous nucleus was normal; the cell with normal nucleus and cancerous cytoplasm was cancerous.  This result has been confirmed in other labs [reviewed by Seyfried, 2015].  Still, the genetic paradigm has a stubborn grip on cancer research and treatment to this day.

An alternative theory of cancer as a metabolic disease was put forth by the Nobel polymath Otto Warburg in the 1930s.  The principal proponent of this theory today is Thomas Seyfried of Boston College.  Seyfried cites evidence that damage to the nuclear DNA, conventionally thought to be a root cause of cancer, is actually an effect of the damaged mitochondria and irregular metabolism.  “The metabolic waste products of fermentation can destabilize the morphogenetic field of the tumor microenvironment thus contributing to inflammation, angiogenesis and progression.”

Every cell in our bodies (and almost every cell in all eukaryotes everywhere) makes uses of energy in the form of ATP, adenosine triphosphate.  ATP is manufactured in the mitochondria, usually by a controlled burning of sugar to form CO2 and H2O. Highly energy-intensive cells such as muscles and nerves have thousands of mitochondria in each cell.  The word “respiration” in this context is used to mean burning sugar in an efficient energy conversion process, yielding 38 ATPs for every sugar molecule.  But when oxygen is scarce, perhaps because you’re breathing as fast as you can or sprinting in deep anaerobic mode, another process can be used to rapidly convert available sugar stock to lactic acid, requiring no oxygen at all, but yielding only 2 ATPs per sugar molecule.  The latter process is called “fermentation”.  (This observation explains the extraordinary effectiveness of interval training (sprints) for weight loss.)

Warburg was among the first to notice [1931] that most cancer cells use fermentation rather than respiration as an energy source.  Metabolic studies pointed to damaged mitochondria in tumor cells that had become inefficient in producing sufficient energy through respiration.  He theorized that impaired mitochondrial function is the root cause of cancer.  In fact, Warburg did some of the early work establishing the role of mitochondria as cellular energy factories.

So most cancer cells are sugar addicts.  They consume enormous amounts of sugar, both because they are actively growing and dividing, and also because they use sugar so much less efficiently than normal cells.  A PET scan can be used to visualize concentrations of sugar in the body, and PET technology is often used to locate tumors. 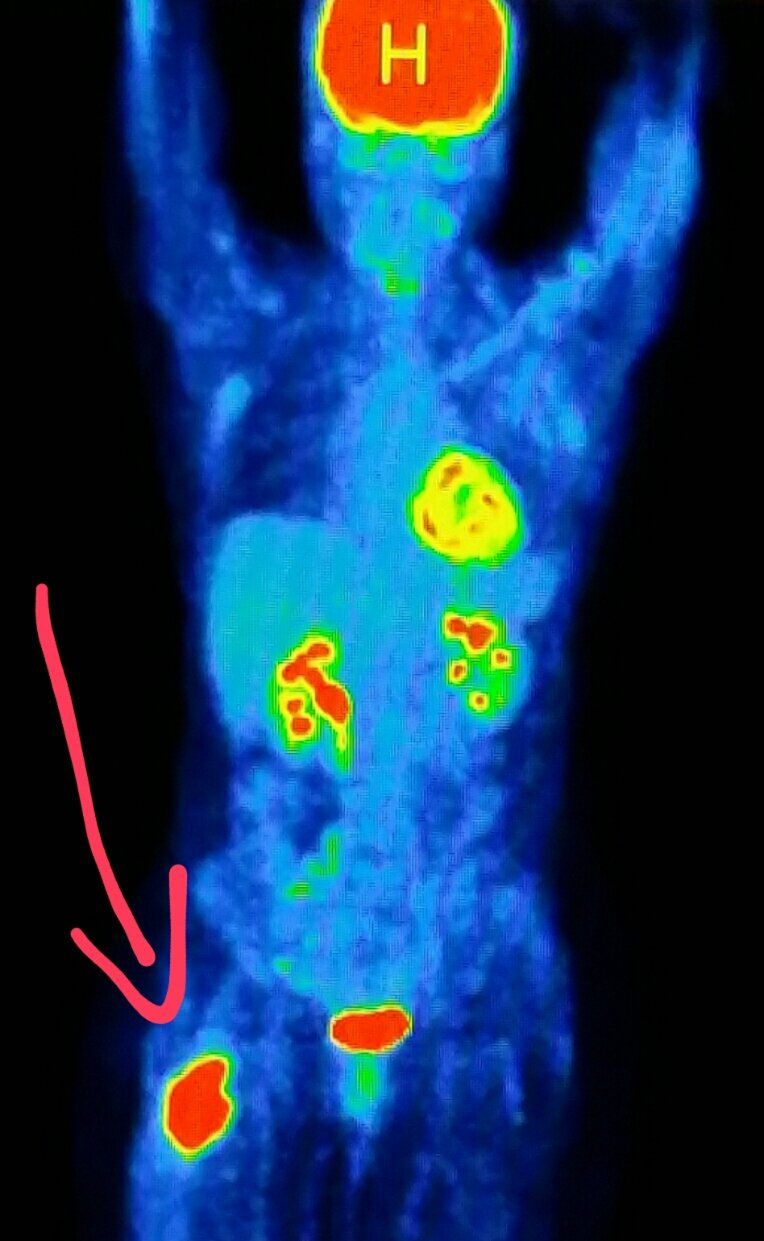 Sugar is easily made from carbohydrate foods, and when you eat a diet containing carbs, sugar is the fuel of choice.  Ketones are an alternative fuel used by the body when burning fat, either stored fat or ingested animal fat or vegetable oils.  (Medium chain saturated fatty acids like coconut oil seem to be most effective in inducing metabolic ketosis.)  Unlike sugar, ketone bodies cannot be fermented.  They generate ATP energy only through oxidative respiration in the mitochondria.

Are zero-carb diets an effective treatment for cancer?

Some well-known cancer drugs (Gleevec, Herceptin) already target the fermentation metabolism.  Acarbose has been proposed but not yet tried.  But might it be safer and more effective to starve cancer cells by cutting carbohydrates in the diet to zero?  There is a robust literature suggesting, “yes” [e.g., ref, ref, ref, ref, ref, ref, ref] but so far the results have been less than earth-shaking.

A search of ClinicalTrials.gov yields 25 trials of ketogenic diet variants for cancer treatment.  Most are in early stages, 5 have been completed, 2 have results.  In this study, the ketogenic diet, with or without chemotherapy, did not cure glioma.  This small study found modest benefits in a variety of advanced cancers.  These results are consistent with many mouse studies, in which some benefit was recorded from the ketogenic diet, but not a dramatic difference.  The most encouraging results I have found was a study in which 9 of 11 mice treated with a combination of radiation and a ketogenic diet were cured of brain cancer.  Clearly, this is no miracle cure, but it’s too early to give up–we’re just figuring out how to make the diet work, and it has not yet been tried except at late stages, after all else has failed.

Seyfried has proposed a “press-pulse” system based on this vulnerability, targeting the glucose metabolism and the glutamine metabolism with hyperbaric oxygen.  Besides glucose, glutamine is also a major fuel for tumor cells.  Drugs will be required to target glutamine, as glutamine is the most abundant amino acid in the body and can be easily synthesized from glutamate.  Hyperbaric oxygen requires a patient to be enclosed in a pressurized oxygen chamber or room filled with pure oxygen at 2.5 x atmospheric pressure.  There is one highly encouraging case report for the success of this triple combination—hyperbaric oxygen, glucose inhibitors, and low-dose chemo—in which a late-stage, resistant breast cancer is driven to total remission.

Last week, a research paper from Duke U suggested a target for attacking the fermentation metabolism of cancer cells, and a marker for identifying which cancers are likely to be sensitive to it.  The research group of Jason Locasale found a protein called GAPDH which switches to the fermentation metabolism, and a compounded called koninjic acid, extracted from fungi, that inhibits GAPDH.  They have tested koninjic acid extensively in cell lines, and have begun testing in live mice.  Whether such drugs are more effective than simply restricting glucose is a topic for investigation. 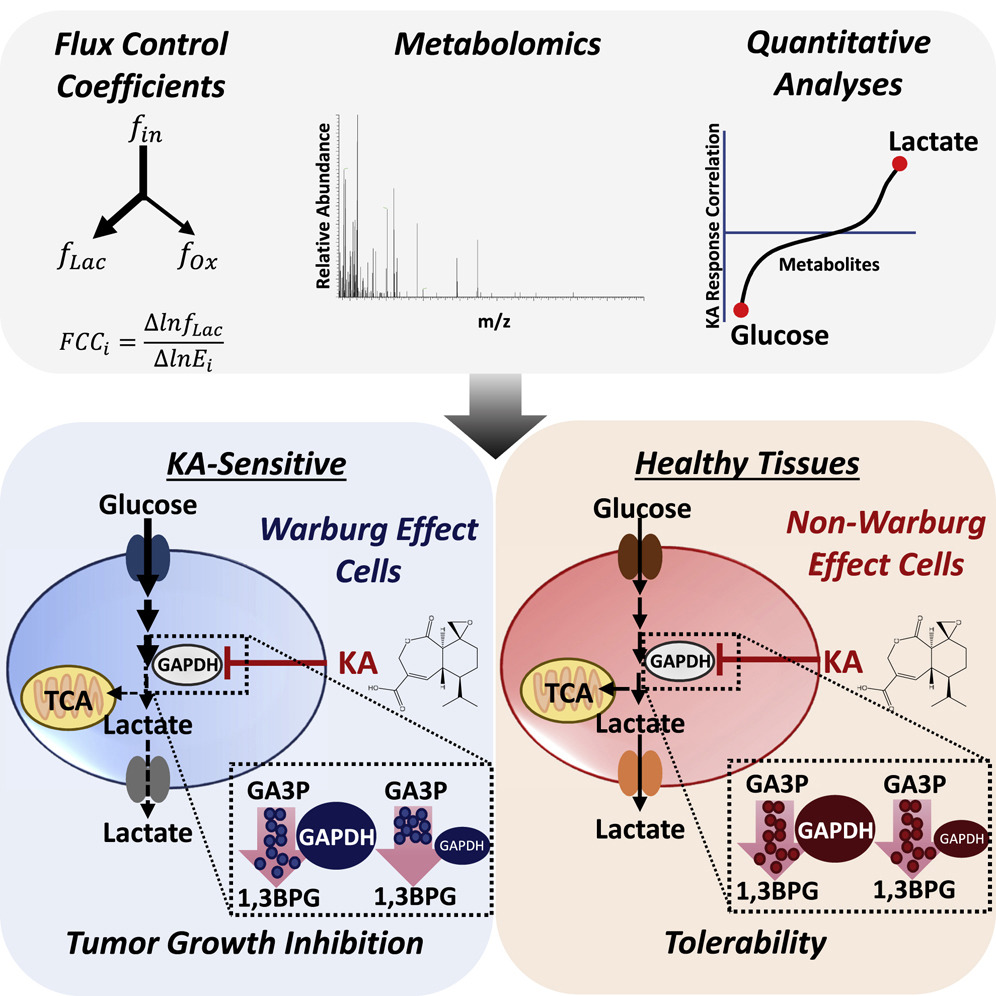 Explanatory diagram from the Duke study of GAPDH

Supplements that promote mitochondrial health include CoQ10, PQQ, mitoQ/SkQ, alpha lipoic acid (ALA), carnitine, and melatonin.  Can they lower risk of cancer?  So far, we have just a few hints; this is a promising area for research.

CoQ10 was studied in the 1990s as a cancer treatment, with some encouraging results [ref].  PQQ has been shown to kill cancer in vitro [ref].  One mouse experiment looked at ALA as part of a cancer treatment [ref].  Use of carnitine remains theoretical [ref].  Most has been written about melatonin [ref, ref, ref], but even here, there is no epidemiological evidence.

All the evidence for radiation and other mutagens causing cancer might be re-interpreted in terms of mutations to mitochondrial DNA.  (Mitochondria live in the cytoplasm, outside the cell nucleus, but they have a bit of their own DNA and ribosomes for transcribing it.)  Damaged mitochondria can also cause cancer even when their DNA is intact, and Seyfried (after Warburg) makes a strong case that mitochondrial damage is the root cause of cancer.  Inflammation is probably the single worst source of mitochondrial damage. Do we need one more reason to minimize inflammation?  Viruses often target mitochondria for their own ends, and this may explain cases in which viral infections are associated with etiology of cancer.

The insight that mitochondrial damage is the root cause of cancer (preceding nuclear mutations) also has broad implications for cancer prevention.  As for treatment, there have been a few disappointments and also some promising pilot studies, especially in combining glucose deprivation with radiation or chemo to finish the job (“press-pulse”).  This is a research field that deserves much more attention.

*There are exceptions to both these generalizations.  There is controversy whether ionizing radiation at low dosages causes cancer [ref]; and cell phones (non-ionizing) have been linked convincingly to cancer risk, presumably by a different mechanism than breaking chromosomes [my column last year].

I sent a draft of this column to Thomas Seyfried, who was kind enough to edit it in detail and add references of which I was unware.

I was led to this subject by my co-author’s publisher, Chelsea Green, publishers of
Tripping over the Truth, by Travis Christofferson.

363 thoughts on “Is Cancer a Mitochondrial Disease?”

Leave a Reply to Alex a Cancel reply