We all lose insulin sensitivity with age, and this is is a primary mechanism by which we become more vulnerable to all the diseases of old age.  But there is much that we can do to retain insulin sensitivity: diet, exercise, drugs and herbs.  Because these act differently on the metabolism, there is reason to hope that combining treatments will yield combined benefits (this is theoretical–there is no data available on combinations.)

While emerging anti-aging technologies are still emerging, the best-tested treatments we have for the present all rely on the insulin metabolism.  Our bodies are evolved to sense stress–especially food scarcity–and adjust our rate of aging to compensate for those around us who may be starving to death.  (This is the demographic theory of aging, and though the theory may still be controversial, the fact that we can address the rate of aging through the insulin metabolism is undisputed.)

Insulin manipulation works much better in mice than in larger animals like us, but it’s the best-studied, surest way to improve your odds for a long and healthy life, and there are vitality, alertness, productivity, freedom from infectious disease–almost every aspect of your quality of life is improved with more exercise and less food.

The best measure of diabetes risk is glucose tolerance.  The body is challenged by swallowing a dose of sugar, and glucose levels in the blood rise immediately.  Over several hours, follow-up blood tests measure how quickly the blood levels come back to normal.

Fasting glucose is a secondary predictor, not so robust as glucose tolerance [ref].

For anyone who doesn’t choose to maintain the most rigorous program of exercise and caloric restriction, metformin can make up the difference.  Metformin is a fifty-year-old drug, long out of patent and cheap.  Mice fed metformin live longer.  We have a great deal of epidemiological data on metformin, because tens of millions of people have been taking it for decades.  Diabetics who take metformin have much lower rates of cancer, heart disease, and AD.  Arguably, their survival statistics may even be better than non-diabetics who don’t take metformin.  There are researchers who are proposing that Alzheimer’s Disease should be regarded as type 3 diabetes.  (FightAging! led me to this article.)

The numbers look so good that Nir Barzilai (Einstein Hospital, New York) has banked the future of FDA policy on a clinical trial to demonstrate that aging is a risk factor that can be mitigated, and that aging should be recognized as a treatable condition.  Last month, there was a major article in Science Magazine about his program.  It is hardly a radical claim, from a scientific perspective.  But government policy lags science, and what Barzilai is doing will be a boon for us all, if it works.

Metformin is a safe drug, without serious side-effects except rarely among people taking high doses.  I have recommended it to anyone over 40 who is overweight, or over 60 even if you’re not overweight.

Many people prefer a natural alternative, and I’m witing today about three good ones.  The reasons for preferring “natural” may transcend science.  There is a general feeling that natural products are safer, though in this case we know a heck of a lot about the safety of metformin.   There are decades of epidemiological data for metformin, vs centuries of traditional wisdom for the herbal products.  Readers of this column are accustomed to my periodic rants about the fact that capitalism has distorted funding priorities for medical research, hence we know a lot less about natural products than about patentable ones.

Thanks to Bill Sardi for introducing me to Gymnema.  Here is a review of limited evidence for Gymnema and diabetes that was available as of 2007.  Gymnema has a long pedigree through the Indian ayurvedic tradition of life extension, in which it is called mesasrngi [sic].  Gymnema reduces uptake of sugar from the small intestine, and also increases generation of insulin in the pancreas.  The former is definitely beneficial; the latter is helpful for diabetes type 1, but not for type 2 which is associated with aging.  In this study, Gymnema improved cholesterol profiles, fasting glucose, and also results from the (most predictive) glucose tolerance test.  This study found similar benefits in obese mice.

Berberine is a chemical, not a plant, though it is extracted from several different plant sources.  The best source is goldenseal.  Berberine has a 5,000-year legacy in Chinese medicine–even longer than Gymnema has in Indian medicine. 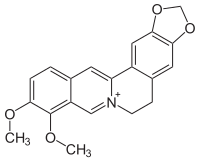 (It may look complex, but still counts as a “small molecule,” and compared to proteins it is tiny. Insulin is considered a small protein, but it is 18 times the molecular weight of berberine.)

Metformin reduces blood glucose by shutting off the source (in the liver), while berberine reduces blood glucose by augmenting the sink (glucose uptake in muscle and nerve cells). Berberine affects cells in much the same way as insulin, increasing the uptake of glucose from the blood into the cell.  This means that if you take berberine before exercise, it might (theoretically) enhance your performance, while taking metformin before exercise might (theoretically) reduce your performance.

This study compared metabolic benefits from berberine with metformin head-on in a three-month trial.  500 mg berberine had benefits equal to 500 mg metformin, with fewer reported stomach upsets and better triglyceride control for berberine.

This column by Frank Shallenberger raves about the advantages of berberine.

This traditional Chinese herb (绞股蓝) has recently been marketed by LEF under the name “AMPK Activator”.  The latin name of the plant is Gynostemma pentaphyllum. It is sometimes known as “southern ginseng” because it contains some of the same active ingredients as ginseng, deemed the king of all Oriental medicines.  But the anti-diabetic benefits of jiaogulan derive from constituents that are not found in ginseng.  In parts of Southeast Asia, jiaogulan has a reputation as an “immortality herb”.

Like Gymnema, jiaogulan shows promise, both theoretically and in limited human trials, but there isn’t yet enough data to know how well it works.  In one study, it improved both fasting glucose levels and (more important) tolerance.

In promoting its new product, LEF has made a case that low AMPK is part of a keystone aging pathway.  We have less AMPK as we get older.  Both fasting and vigorous exercise increase AMPK levels.  Less body fat leads to more AMPK expression, and, even better, more AMPK leads to burning more fuel, storing less as fat.  This is a positive feedback loop that can work in either direction.  AMPK → faster metabolism → less fat → more AMPK or low AMPK → slower metabolism → more fat → less AMPK.  By adding AMPK, they claim, we can be sure to go around the circle in the right direction. Like many LEF reports, I find this one to be well-rooted in truth but a bit breathless in presentation and overstated in its significance.

Weight control is still your first line defense against the creeping insulin resistance that affects all of us as we get older, and only is diagnosed as diabetes in its more severe form.  There’s a school that says low protein diet offers best protection, and another that favors low carbs.  (I have favored carb restriction, but I may be tipping toward low protein.)  You can’t do both without raising fat intake, and there is good agreement that dietary fat shouldn’t be more than 40% of your calories.

Exercise prodigiously.  Exercise right before eating can change your body’s insulin response to the sugar challenge.  Even a minute of high-intensity exercise can make a difference [ref, ref].

Almost all of us can benefit from magnesium supplements.  Zinc [ref, ref] and tiny quantities of chromium might also help.  Resveratrol extends life span in fat mice.  There is some evidence for thiamin (vit B1).  Large quantities of cinnamon may or may not be helpful.  One small study showed a substantial benefit from boswellia=frankincense.

Loss of insulin sensitivity is so closely intertwined with all the diseases of old age that it is hardly distinguishable from “normal aging”.  It’s an issue that we all face, and there is a whole Chinese menu of measures you can take to better your odds for health, vitality and a long life.

The mechanisms of metformin, berberine, jiaogulan and Gymnema are quite different, and there is reason to think that combining them offers more benefit than any treatment separately; but there is as yet no data on combined therapies.

32 thoughts on “Can Botanicals Replace Metformin?”