This is the second of two parts on the history of evolutionary theory.  Last week, I discussed the gene-eyed view of evolution that came to dominate evolutionary theory of the 20th century.  In the 1960s, this view hardened into a dogma, and provoked a reaction, in recognition of the many cooperative networks in nature that are difficult to explain in terms of “kin selection,” the only recourse of the Selfish Gene.  In Part Two, below, I continue with the science of multilevel selection (MLS), and talk about why aging is a tough nut to crack.  Clearly the selfish gene paradigm is inadequate to explain aging.  MLS provides a formal test for deciding whether a given trait can evolve via group selection, and according to these criteria, aging should not be able to evolve.

Where do we go from here?

What is missing from both systems is ecology.  When species’ interpendence is taken into account, it becomes possible to understand aging and many other cases where individuals sacrifice their own fitness to the community.

We left off last week with kin selection, which is the only source of cooperative behavior that is recognized from the selfish gene perspective.  The science of kin selection was formalized by W. D. Hamilton in 1964 (part 1, part 2).

Just a few years after Hamilton, another young Brit named George Price expanded Hamilton’s rule, using math developed by Fisher himself.  Price’s contribution was to realize that a gene might be shared not just by brothers and cousins, but many distant relatives, and perhaps some unrelated individuals as well.  He read about the controversy surrounding group selection, and he proposed to resolve the question with statistical analysis.  The result was the Price Equation.

Following Fisher’s idea, Price imagined a large population of a single species that remained constant from one generation to the next.  What Price added was to divide the population into cooperative groups.  An altruistic gene, in Price’s model, would give the individual in which it appeared a disadvantage compared to others in that group that might not carry the altruistic gene.  But the group as a whole would thrive in competition with other groups, based on the number of copies of the altruistic gene that appeared in group members.  In other words, a cooperative gene is conceived as increasing the fitness of a group in proportion to how many members of the group have that gene.  This benefits the group in competition with other groups.  However, within each group, some individuals have the gene and others do not.  The individuals who carry the cooperative gene are at a disadvantage relative to selfish individuals within the same group that do not carry the gene.

The Price Equation applies analysis strictly by Fisher’s rules to to this situation, and it measures the balance between individual selection and group selection that can determine the fate of an altruistic gene. 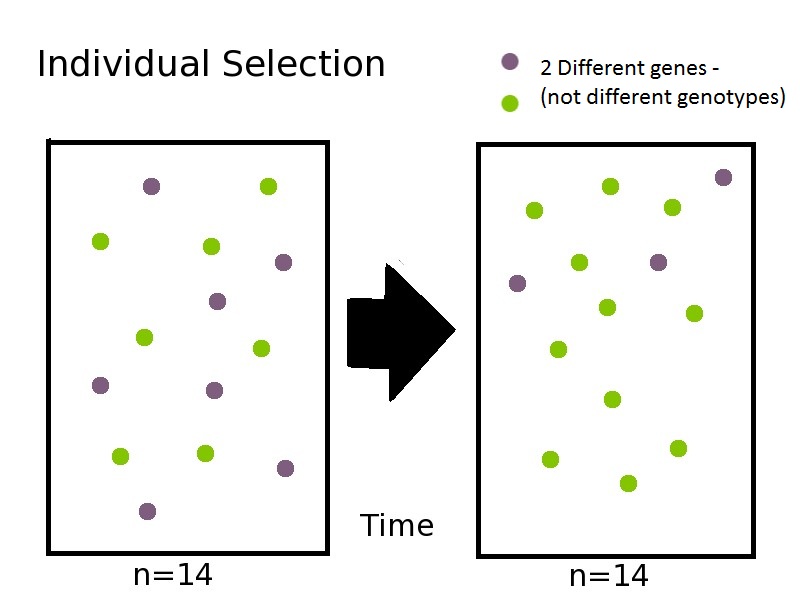 Fig 1a.  This is the model of Fisher.  Genes increase or decrease in frequency over time within a population of fixed total size. 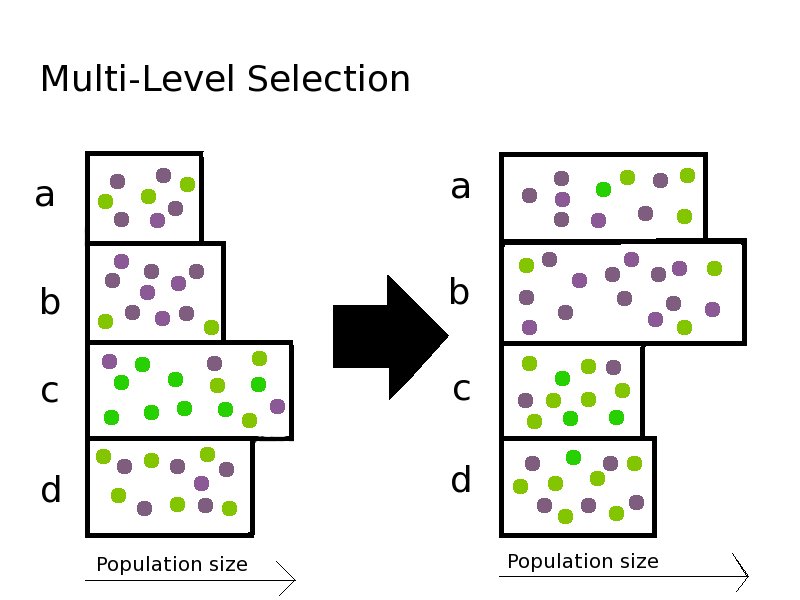 Fig 1b.  This is the model of Price.  Two things are going on simultaneously.  Genes increase or decrease in frequency within each population based on their individual effects.  Meanwhile, some groups are growing at the expense of other groups, based on the aggregate group effects of these same genes.

The form of the Price Equation may be something that only a statistician can love.  But the conclusions are actually quite sensible and intuitive.  In the competition between selfishness and altruism, how do we know which will come out on top?

The story of Price’s life is wonderfully colorful and tragically fated.  Price did not live to see his ideas spawn a cooperative cult within evolutionary biology, expanding to become a formidable and respected minority in the 21st Century.  It was David Sloan Wilson, a graduate student at Harvard and later a professor at Binghamton, who picked up the Price Equation and built his career promoting and popularizing the idea of group selection, citing hundreds of examples of cooperation in nature that are not well-explained by Hamilton’s Rule, and establishing the plausibility of Price’s model in explaining these.  Wilson promotes the science of multi-level selection (MLS) based on a dynamic balance between evolution operating simultaneously at the level of the individual, and larger communities, groups and ecosystems.

This would seem to be an inclusive position.  Why should it inspire such controversy?  Wilson has been extra-cautious in establishing the scientific basis for multi-level selection.  Nevertheless, he has become a lightning rod for charges that group selection is a fallacious idea, and that the science of MLS somehow lacks legitimacy.  Richard Dawkins, in particular, has become a vituperative antagonist of Wilson’s work.

Aging shows many characteristics that indicate an evolved adaptation – most notably that the genetic basis for aging is hundreds of millions of years old, and seems to have been conserved from microbes to man.  But aging offers no selective advantage to the individual.  In fact, getting old, losing your fertility and dying can only decrease your individual fitness.  So evolution of aging is a prime candidate for explanation in terms of MLS.  Maybe aging evolved because of its benefit to the community.

So it is natural to apply Price’s criteria.  Do we expect group selection or individual selection to predominate in the case of aging?

And so, as an explanation for the evolution of aging MLS strikes out.

Beyond the Price Equation

The critical omission in the analyses of all three scientists, Fisher, Hamilton and Price, is the volatility of population size, based on interactions among different species.  Population dynamics is the key to understanding why nature provides so many stunning examples of cooperation, and how the “cheater problem” has been avoided.  This was the insight of Michael Gilpin, a mathematical physicist who turned his attention to the problem of group selection in the mid-1970s.  At a time when computer models were already in common use among physicists but not yet among biologists, Gilpin brilliantly exploited the crude computational resources of the day to build a more sophisticated and general model than Fisher or Hamilton or Price.  His 1975 monograph, called Group Selection in Predator- Prey Communities, challenged fundamental assumptions of evolutionary theory, and created a model that is far more consonant with biological reality.  Gilpin’s work remains poorly understood and its significance unappreciated to this day.

The essence of Gilpin’s message was that the best strategy for individual success is to eat more and transform the biomass of your food into your own offspring, which take over the population.  This strategy leads at the individual level to success, and at the group level it leads to rapid population growth.  The catch is that “food” is also biological.  Whatever your species is eating will suffer a decline as you try to eat more and more, and simultaneously your numbers are growing and growing.  As your species prospers, your food species goes into decline.

Here’s the punch line:  Exponential mathematics makes this process rapid and dramatic.  One generation there’s plenty of food, the next generation there is no food at all.  The process of ecosystem collapse is very rapid.  It is a powerful Darwinian force, a fitting counter-balance to the raw strength of selection for selfishness.

(The idea that population regulation is an adaptive biological function, evolved by group selection was not new with Gilpin.  In his introduction, he credits V. C. Wynne-Edwards (1962) and Sir Alexander Carr-Saunders (1925) before him.  But Gilpin put these ideas on a solid mathematical footing, with an explicit mechanism of action.)

If you evolve to maximize your individual fitness, your children will starve.  This insight changes the landscape of evolutionary biology, and remains unappreciated to this day.

And what of the argument that ecosystems are stable and slow to change?  By all appearances they provide a constant biological background in which species may evolve slowly, one at a time.

Implications for Aging and Beyond

Virtually all of evolutionary theory is rooted in a paradigm where you can separate what happens in a single generation, and then think of multi-generation evolution as if it were an iteration of this single-generation process, over and over again.  Another part of the paradigm is that you can think about one trait evolving in one species apart from its effect on other traits and other species.  Not that anyone believes these things are literally true, but it is widely assumed that they are a rough-and-ready first approximation, a good start for a theory that can afford to refine itself later on, at a different level of detail.  This turns out not to be true.  Ecological interactions must be included from the get-go, or we get a very distorted picture of how evolution works.

Aging contributes to taming population dynamics, to slowing the exponential growth, and to softening the inevitable population crashes that follow.  This is not a slow, long-term benefit (like population diversity), but an immediate and powerful force, providing protection against a danger that would otherwise wipe out a species in just a few generations’ time.   It is a powerful and tangible group-level benefit that simply is not captured in the world-view of the Price Equation.

Beyond aging, there are many other coooperative traits for which you might wonder, how could they have evolved “uphill” in the face of strong individual selection against them?  The answer is that the whole system of evolution has evolved to avoid rewarding individuals that exploit resources unsustainably.  This is part of the story of evolution of evolvability.

The way that evolution works is not what we naively imagined in the early 20th Century, but the dynamic of evolution itself has evolved to be far more sophisticated and subtle.